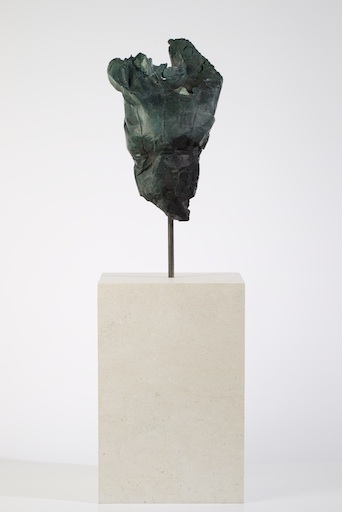 Adam Garguliński-Burks’ sculptures and monotypes all share the same air of melancholic solemnity and the same approach to representation, balancing on the border between the abstract and the figurative. They are the fruit of a search for something deeply human and eternal and related to the experience of the fragility of our existence, the paradox of combining lofty dreams and ambitions with a sense of being lost and helpless. The forms, shapes and textures created by the artist are far from being unambiguous and explicit: they prefer to suggest rather than state, to play a game of associations and – like in poetry – be combined and superimposed with the images they evoke in our imagination. They seem to talk about time and the transient nature of all things, the fatigue of matter and the loneliness of our existence.

Garguliński-Burks’ heads are intriguing, stone or marble-like forms, sometimes coloured, elevated on simple rods above the white cubes of their plinths. The richness of their dramatic, ever-changing, crumpled and tousled form, texture and subtle hues of colour stands in marked contrast with the cool, simple geometry of the plinths. They resemble the precious pieces of antique statues sometimes seen in private collections: broken and crippled, but still full of heroic expressiveness and traces of their long history – ravages and disasters suffered by past cultures and civilisations. During the laborious process of creation – first preparing the medium by mixing it with compounds to achieve appropriate consistency and varying hues of colour; then shaping it, provoking the appearance of cracks, wrapping, twisting and creasing – the artist experiments with his medium by working it: challenging matter and waiting for its response. Torturing and tormenting the medium, he skilfully uses the natural processes of solidification, disintegration and corrosion to his advantage, creating a wealth of textures with dramatic folds of surfaces – smoothness of some, cracks and creases of others.

Together, all this contributes to the expressiveness of the whole form, through which Adam usually tries to convey a sense of frozen movement – life caught in a moment of a sudden turn, escape or flight. While looking at these shapes – despite the fact that they are incomparably more abstract in form – it is difficult not to think of the heads of antique statues – the winged head of Hypnos from the British Museum, the grimace of pain on the face of Niobe from the Nieborów collection in Poland or the Roman copy of the lost Maenad by Skopas, her body tilted backwards in a state of possessed frenzy. Adam’ s forms echo the long tradition of human figure in art, deeply rooted in European culture and dating back to Ancient Greece. Their form invites us to complete them with images from our own memory, to trace the cracks and scars with the fingertips of our imagination and find valiant heads, tired faces furrowed by time, eyes looking up to the sky, and mouths – half-open in some, pursed in others. Sometimes we find suggestions of the rest of the body, too – massive torsos or stooped shoulders. And what is most important about these forms is not the pain they seem to express, but the deeply moving beauty and austere solemnity of existence: poetic metaphor of the human struggle and the relentless passage of time that makes everything crumble.

While Adam’s sculptures bring to mind heroic heads and bodies that border on the abstract, his monotypes (one-of-a-kind flat prints) invite us to stand back and take a wider perspective. They are ghostly, archetypal urban landscapes transcending the concreteness of a particular place and time: blind walls emerging out of darkness, suggestions of monumental blocks and corridors. They are metropolises and labyrinths eaten by time, silent structures and monuments commemorating our ambitions and endeavours, fortresses of our failure and triumph in which we wander around: lonely, uncertain and lost. In some of these painting-like images we will spot a dark outline of a lonely human figure; a mysterious gate is also a common theme here; a gate leading us into the dark abyss of other – still invisible to our eyes – corridors or cellars, perhaps into other worlds.